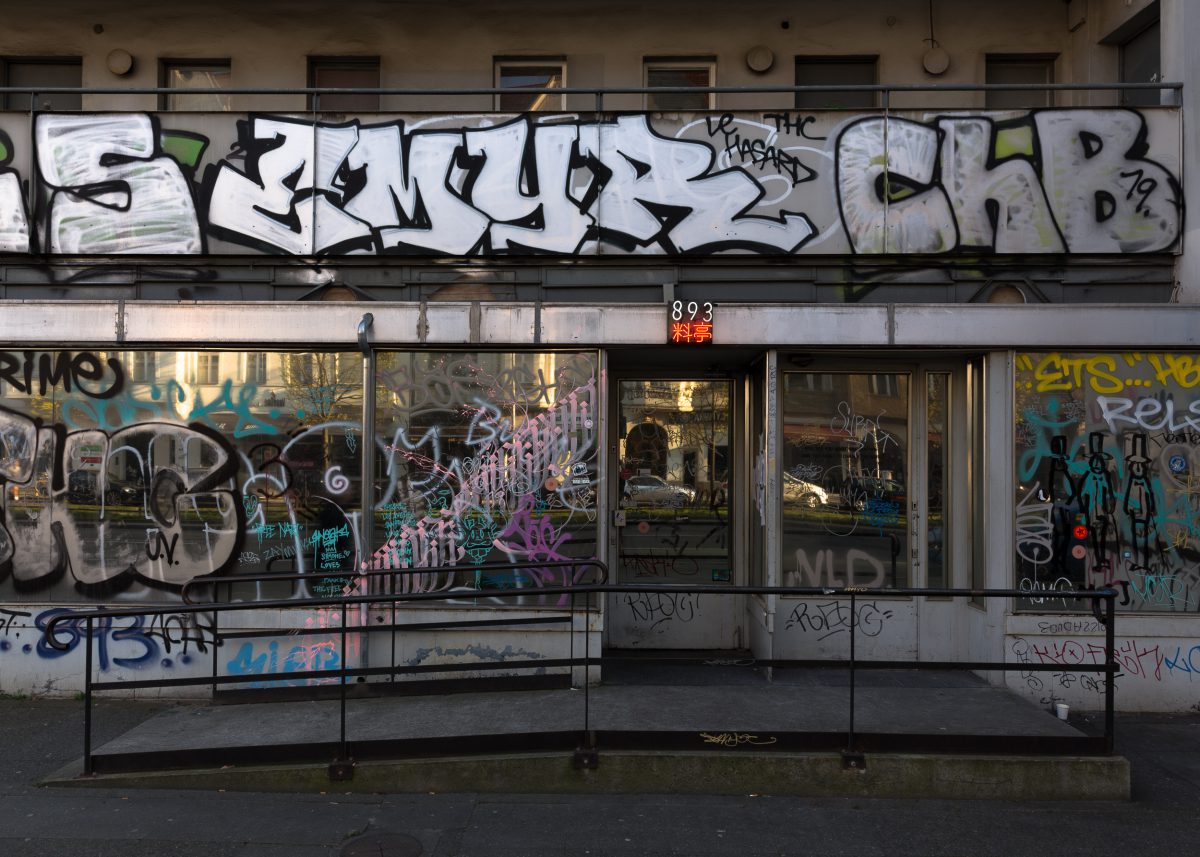 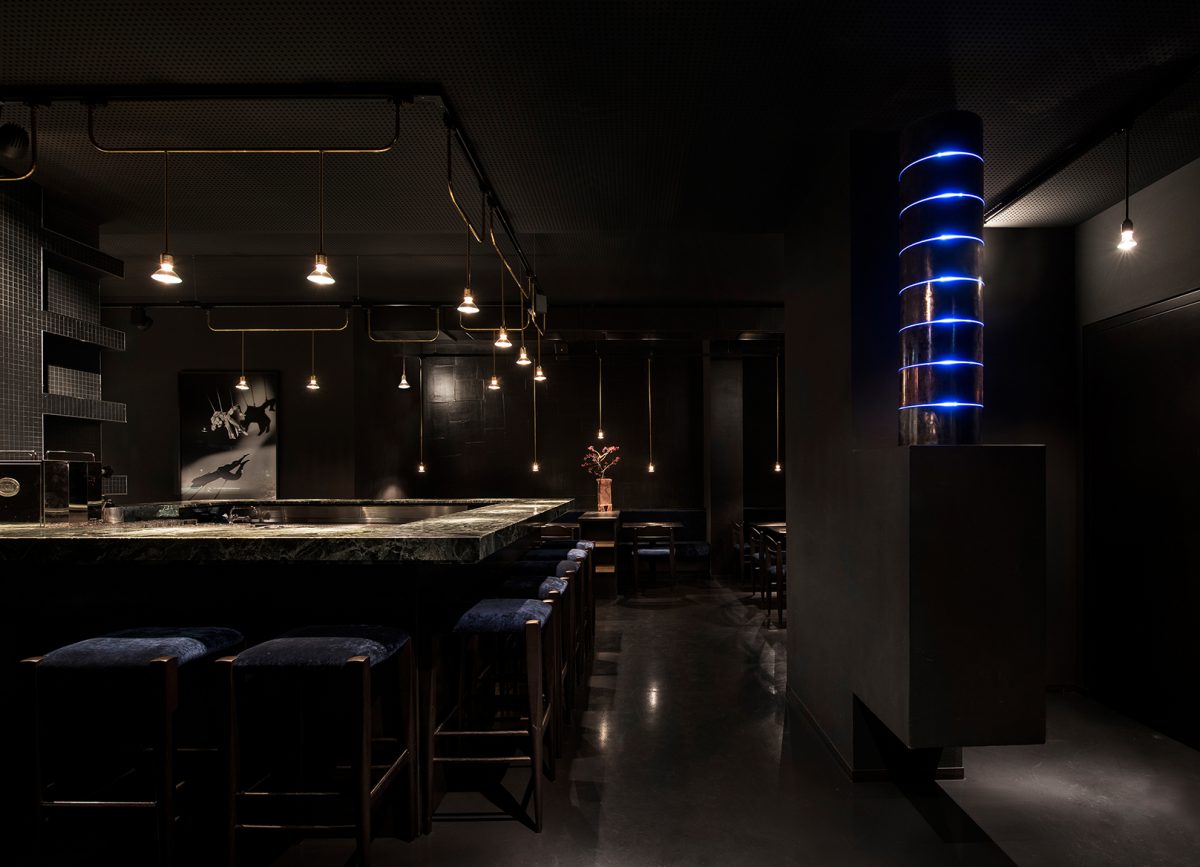 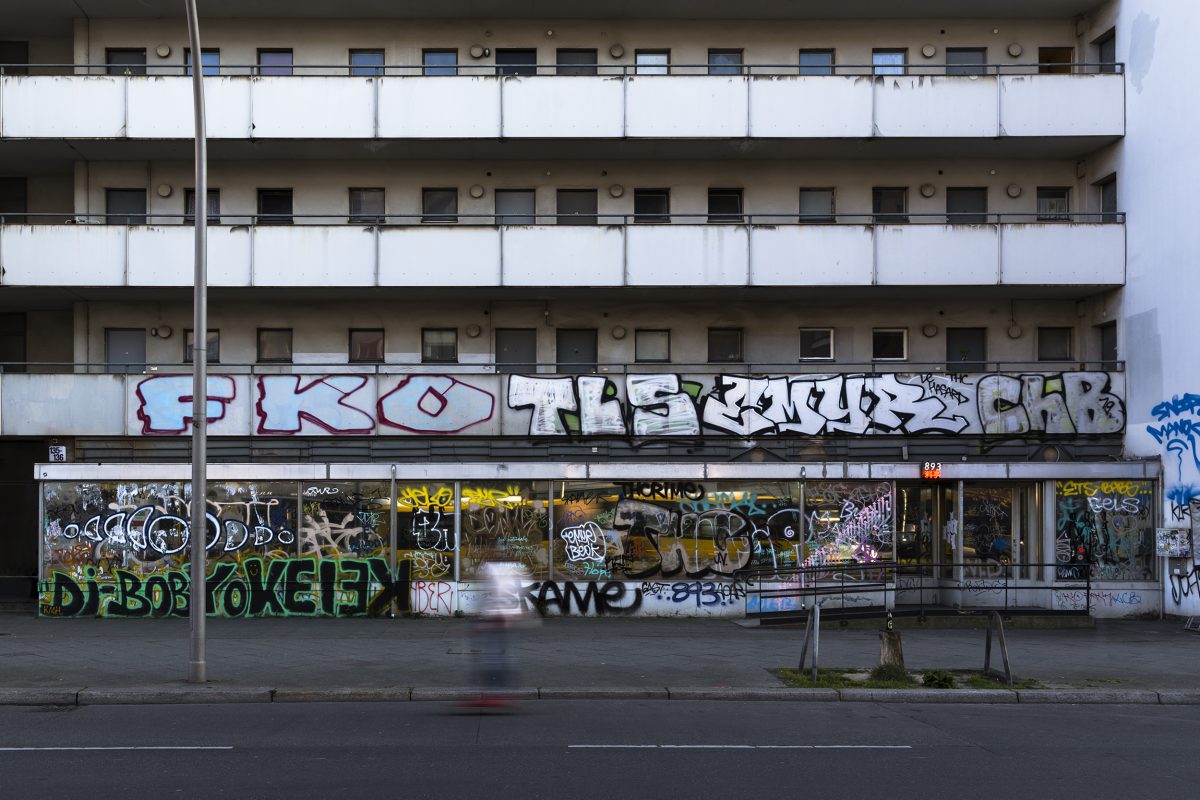 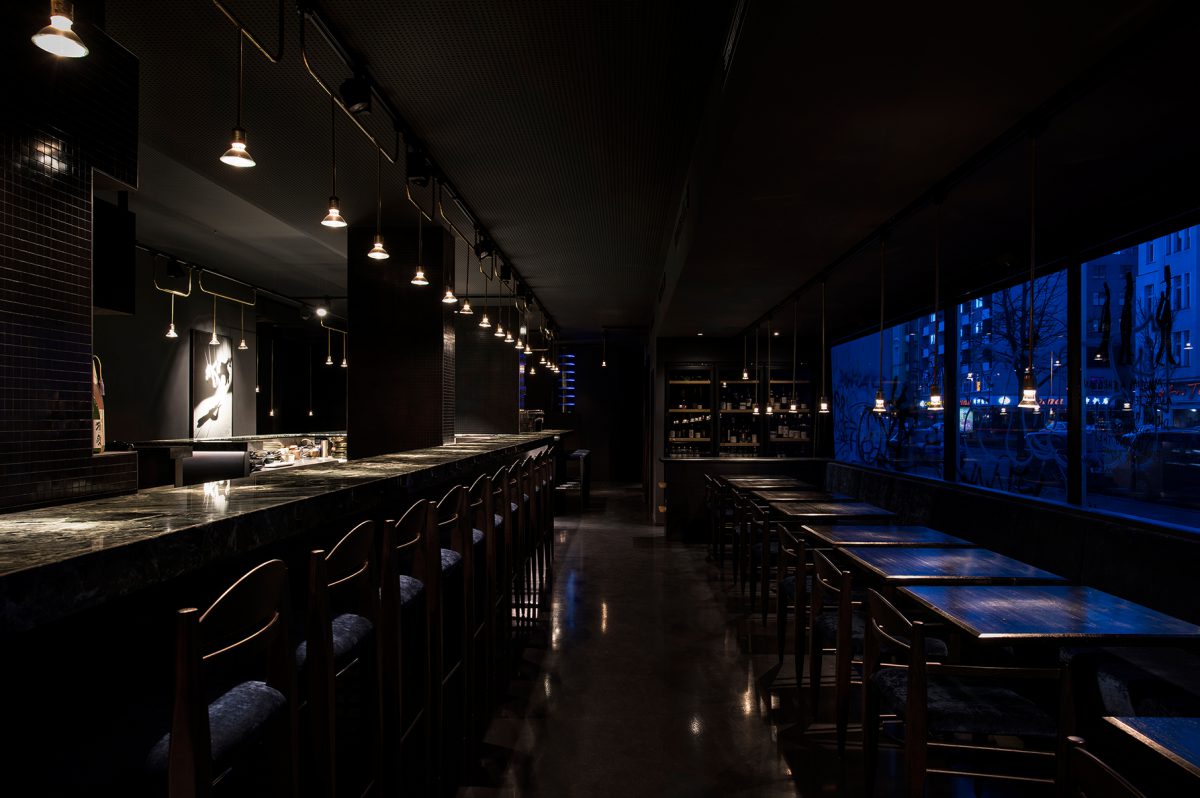 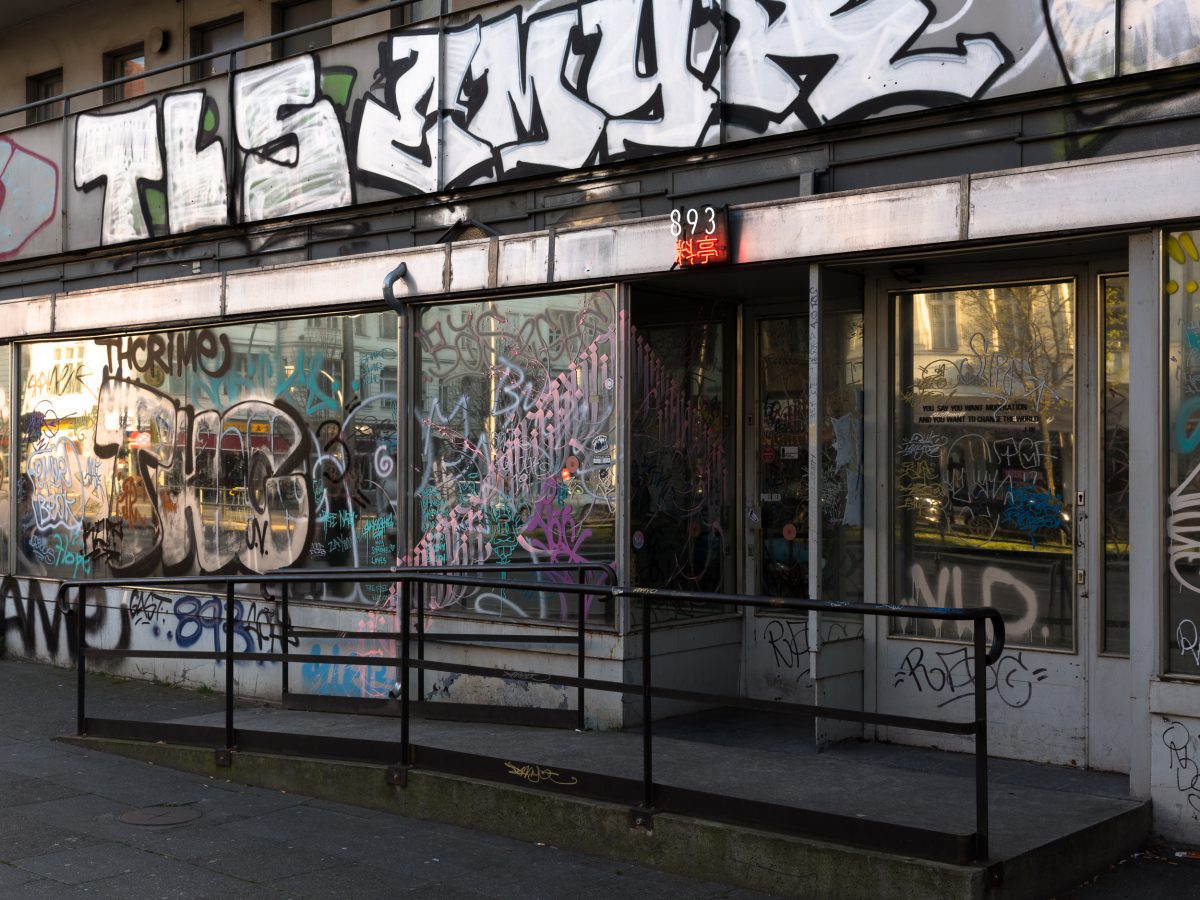 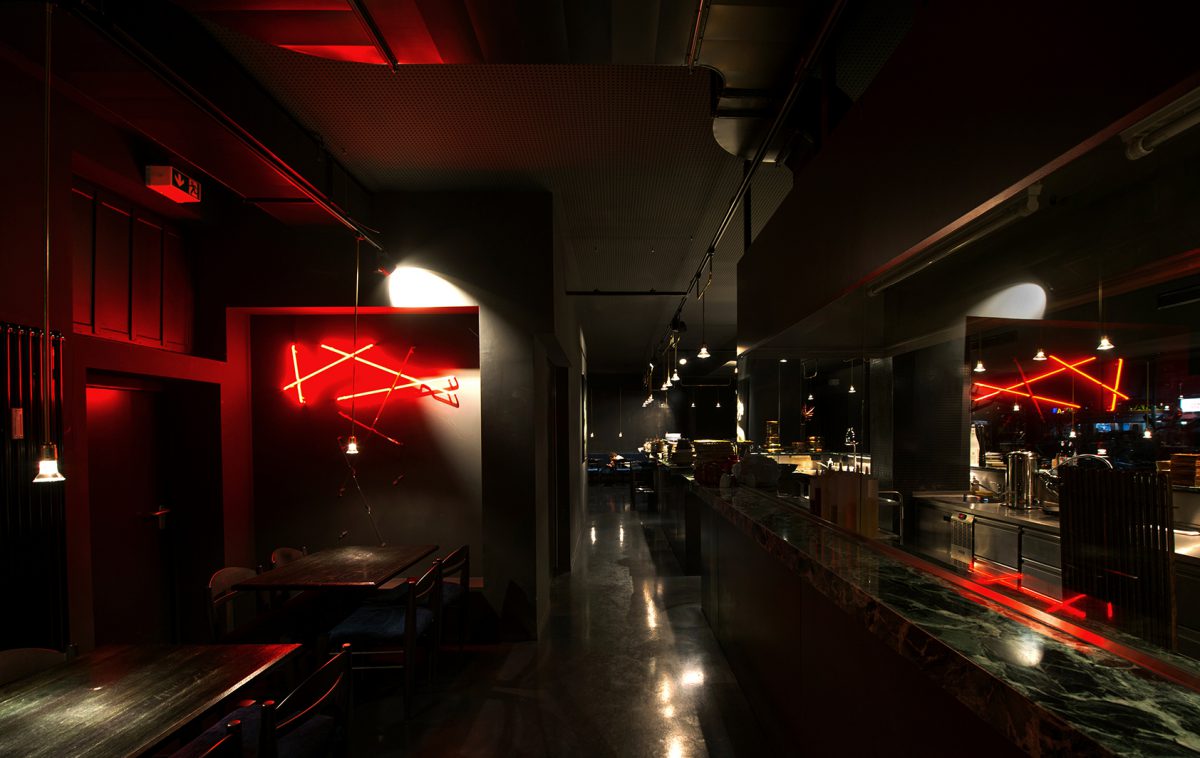 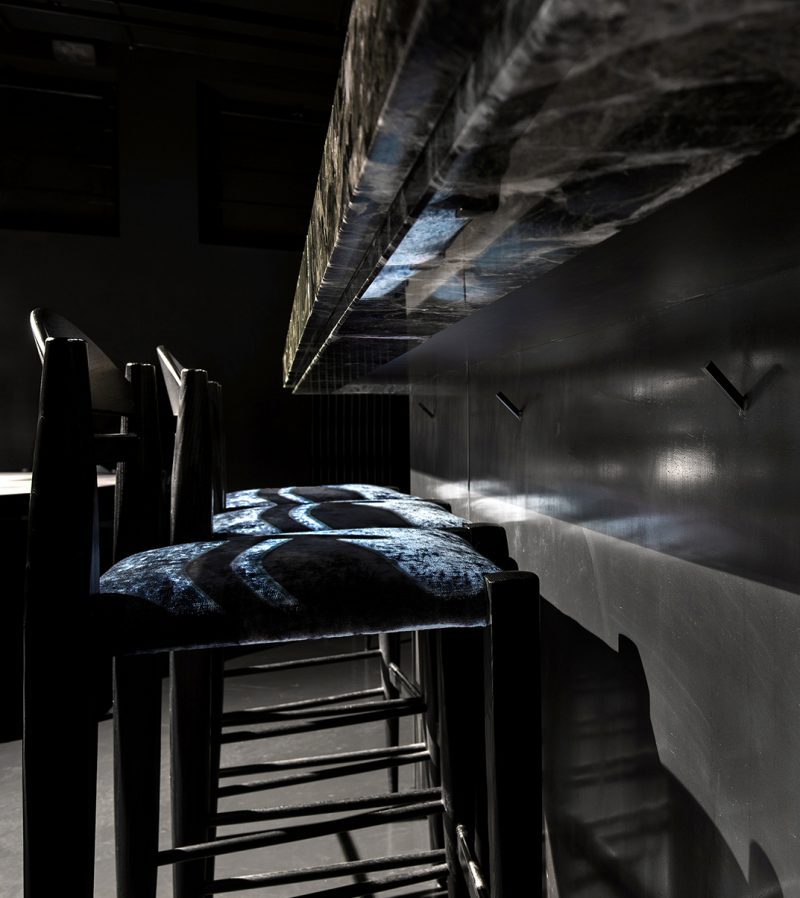 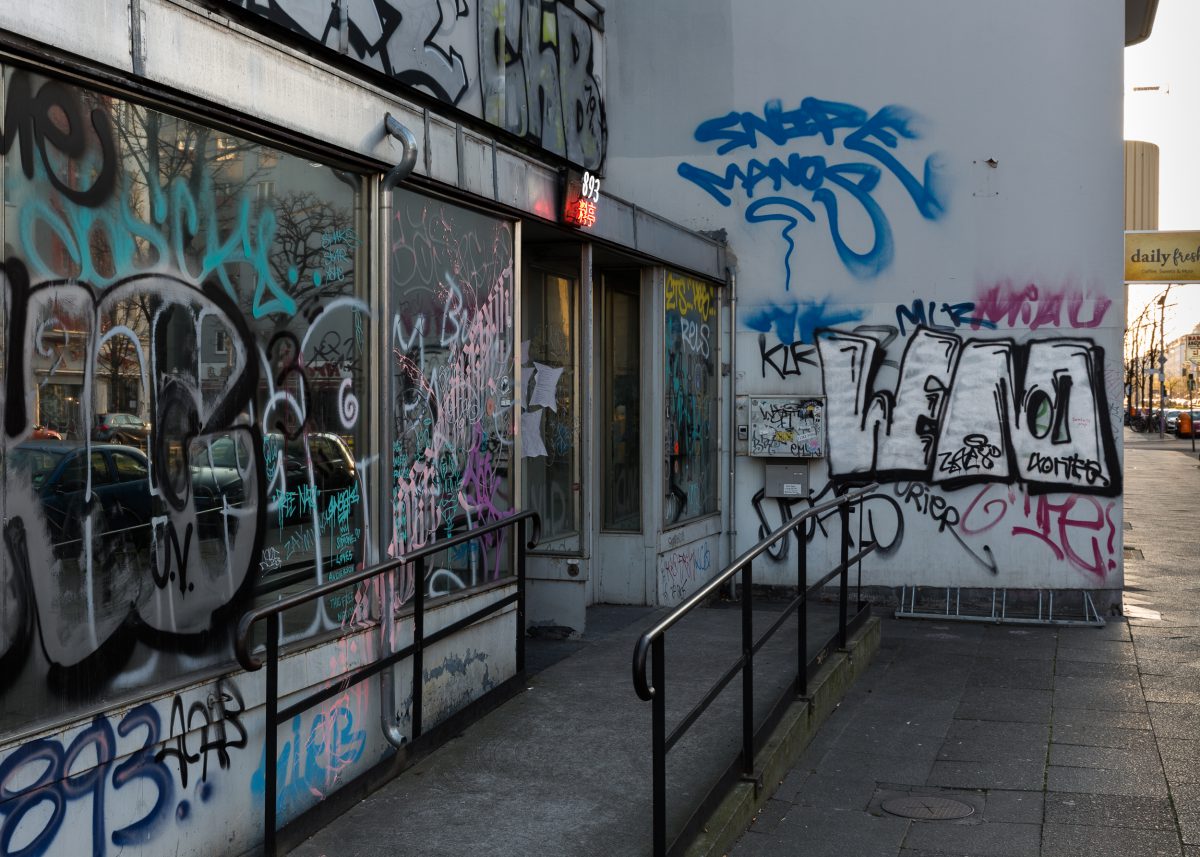 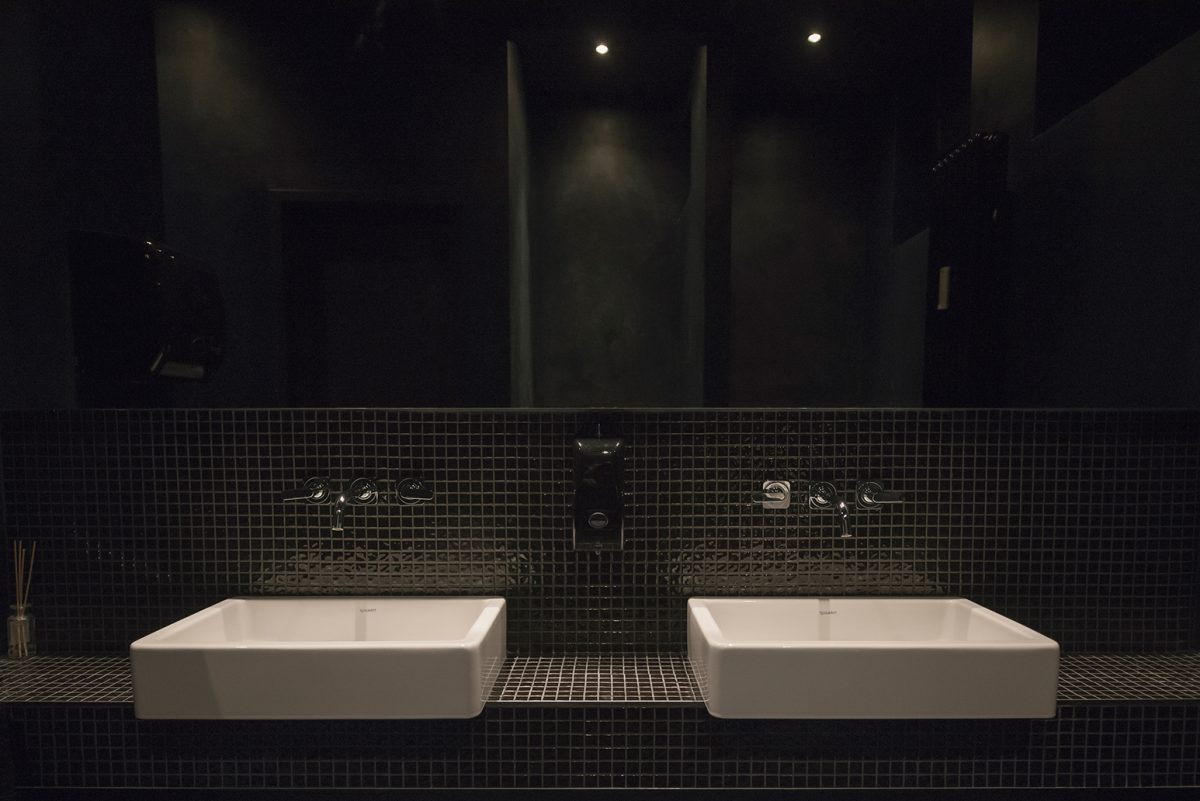 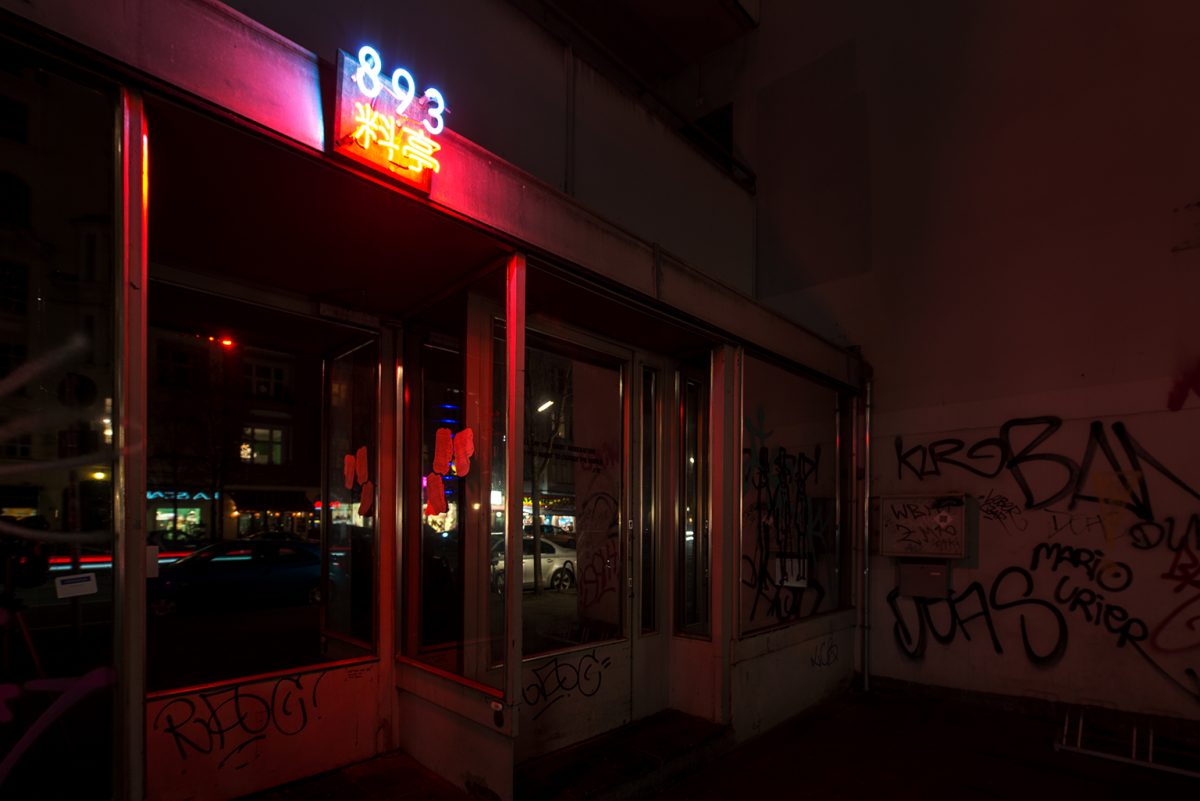 893 Ryotei in Charlottenburg is a reinvention of an old Schlecker (a German drugstore chain) space on Kantstrasse. It is set back a bit from the street and located in the historically protected 1959-1960 building from architect Hans-Dieter Bolle. An aluminum-glass curtain wall with four large evenly divided structural shear wall-columns defined the interior of the space, which had a predominantly open floor plan. There is a main front entrance and a back door cellar entrance from the parking lot in between the building and the metro rail S-Bahn station Savignyplatz.

Using a cue from our client, the owners of Berlin restaurants such as Kuchi, Cocolo, Madame NGO, Funky Fish, and Moriki (Frankfurt) they wanted a sort of “Yakuza” – gangster feel for their new space. We took inspiration from a scene in the Martin Scorsese film “Goodfellas” in which the main character cuts through a long waiting line with his girlfriend and down a flight of stairs to a basement entrance. They pass through some underground scenes and pop up in the middle of the restaurant. So we concentrated our design focus on maintaining an “underground” edge, while also being an elegant nighttime oasis.

893 Ryotei has a police style one-way mirror glass front and a small neon sign on a rough piece of wood. The glass is covered in graffiti and the entrance is non-descript. Inside is an abstracted interpretation of a Yakuza tattoo. It is as if a tattoo were lifted from its skin in various levels and essentially extruded upwards. This upward shift creates colored horizontal surfaces with textured black vertical surfaces. Black cold steel walls create the bar-kitchen vertical extrusion and two rectangular horizontal rings of green marble mark the bar and restaurant areas. A line of blue velvet surrounds the perimeter at seating height forming bench seating. Another perimeter line of green stained oak form the armrest and service stations. There is a circular light green marble table in a corner for special guests and after hour’s poker. The ceiling steps up from the windows and changes from simple black painted drywall to perforated acoustic seamless drywall panels. Two art pieces, The Neon Sliced Kimono and Stacked Heat Rings, which we designed and installed, are set in planned positions to compose and compliment the atmosphere. 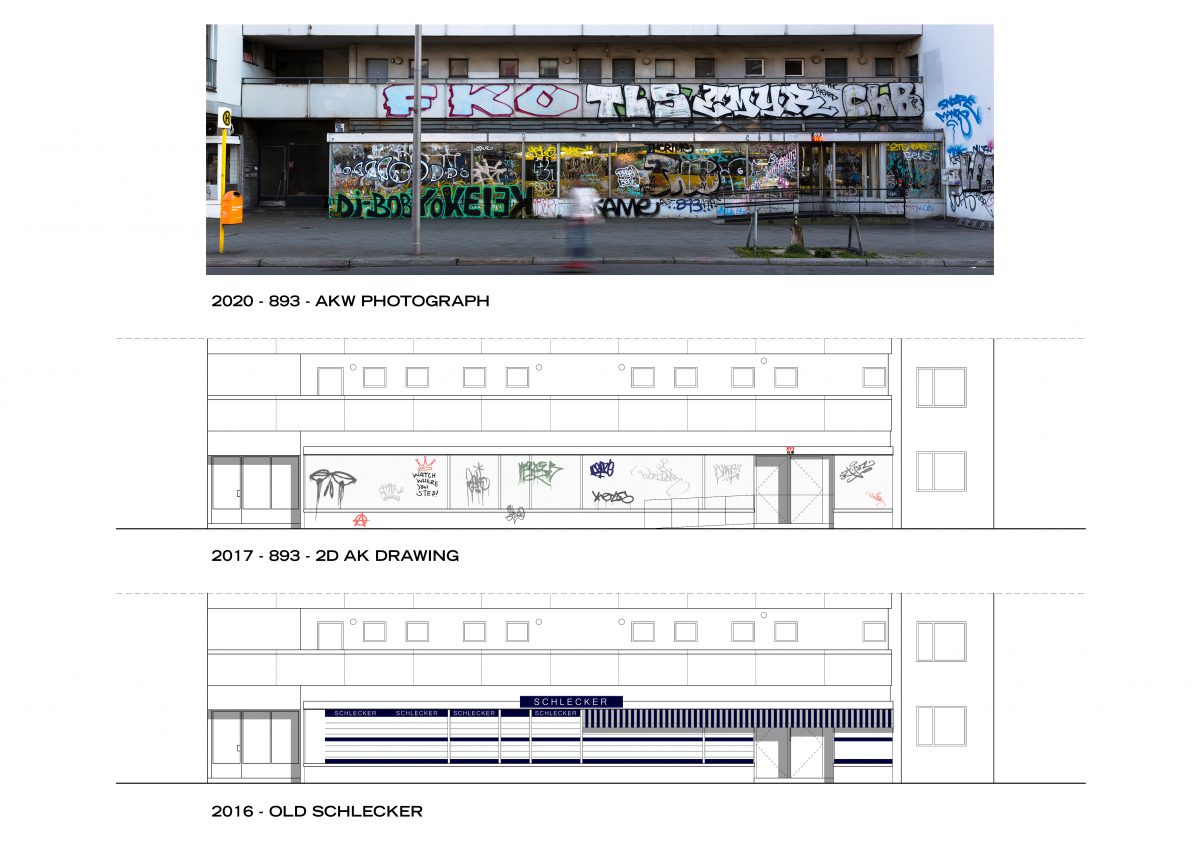 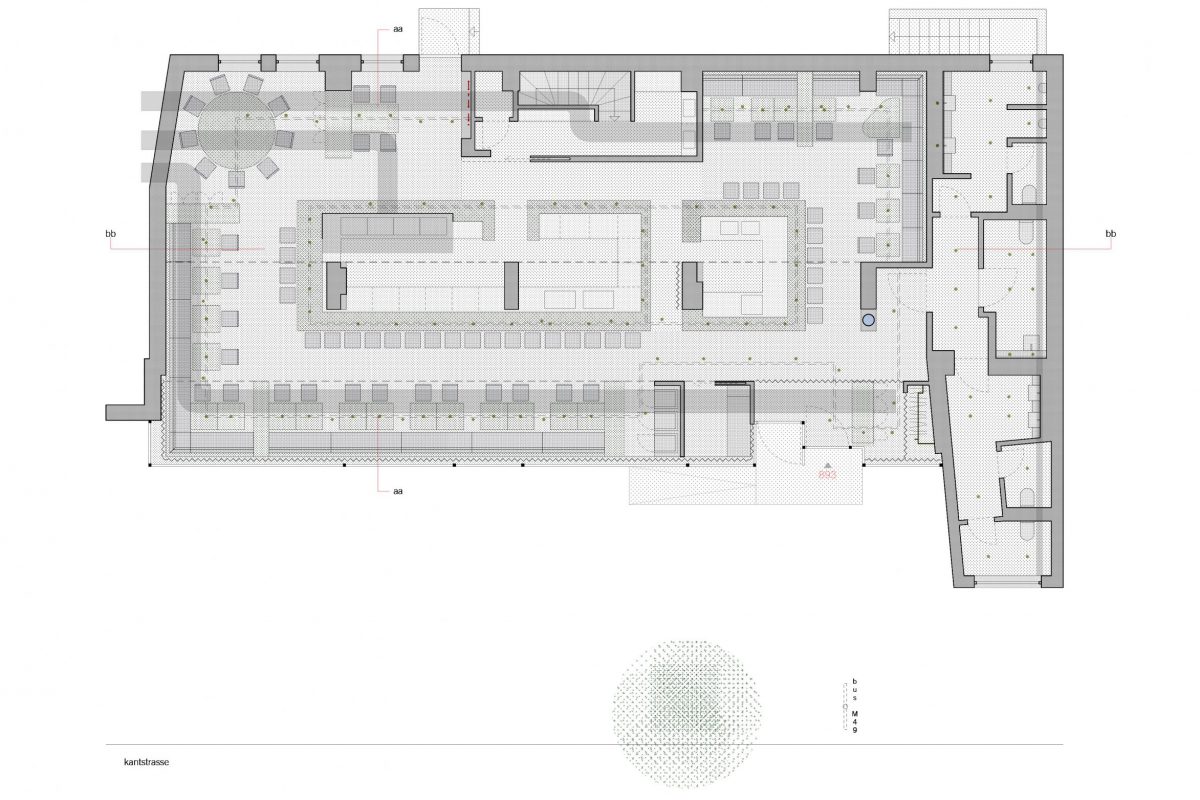 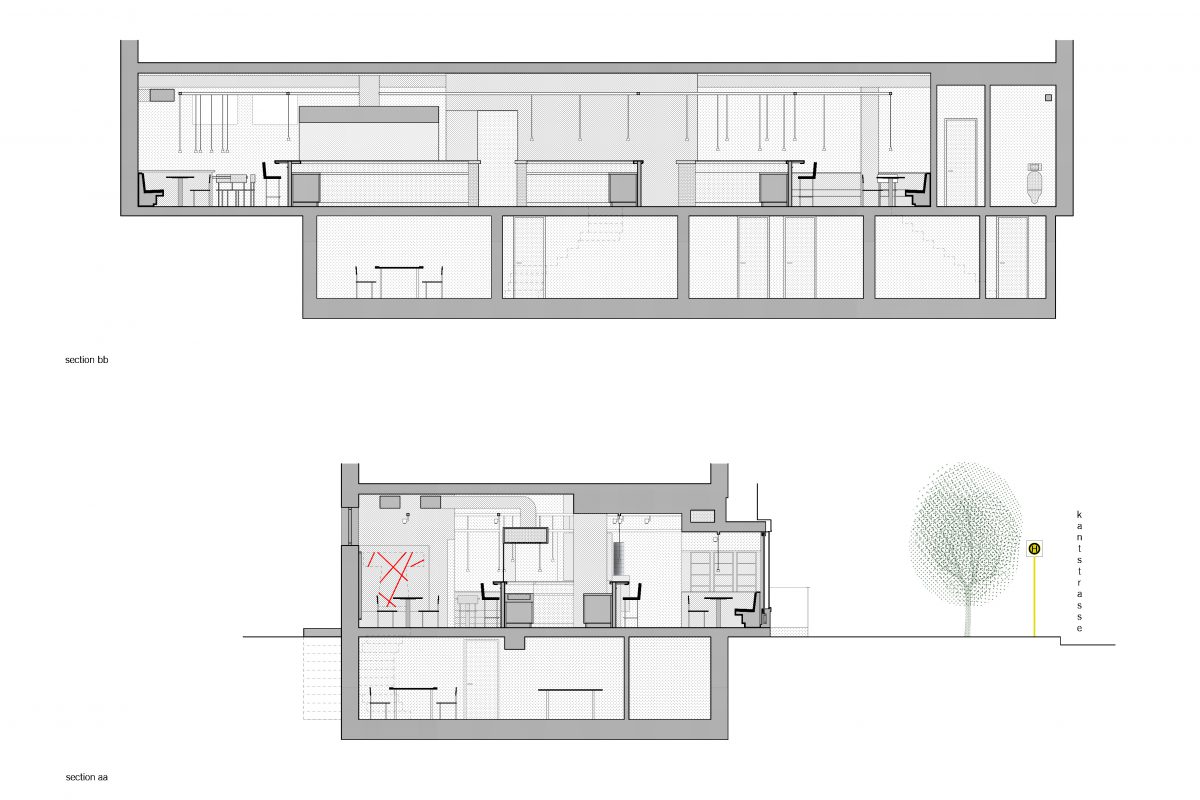 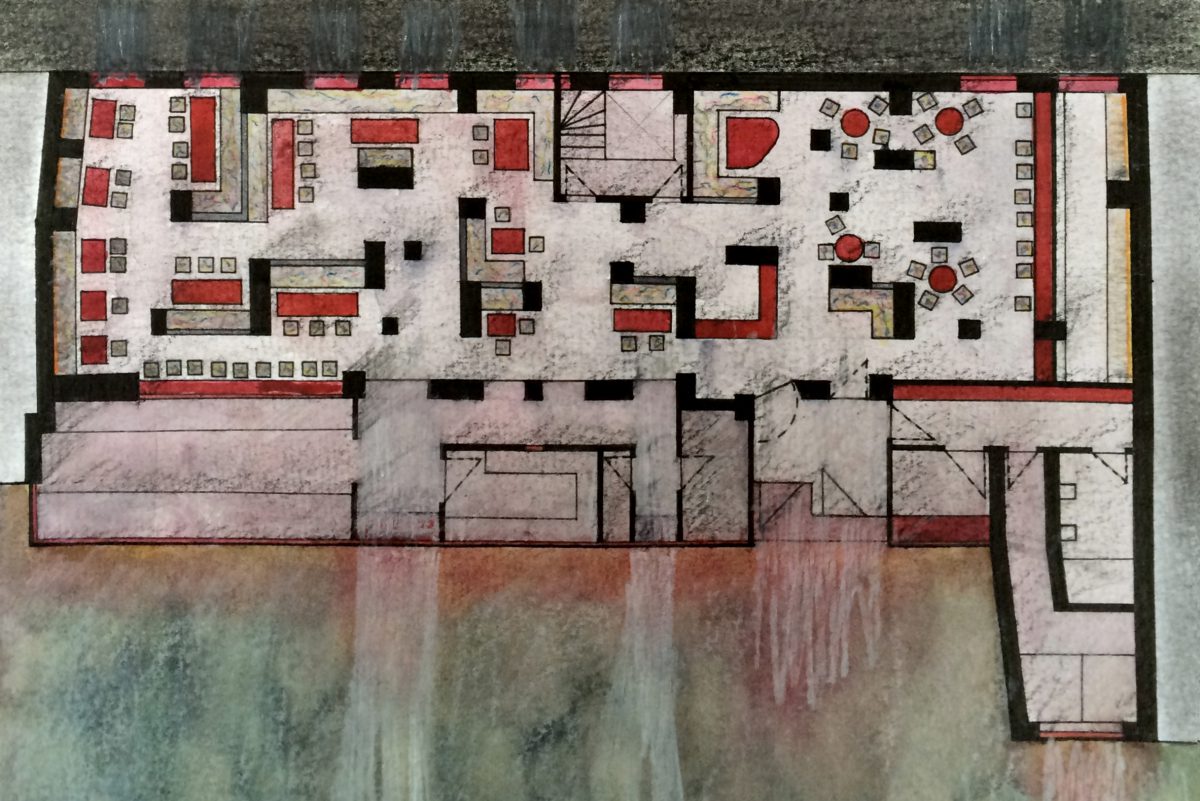 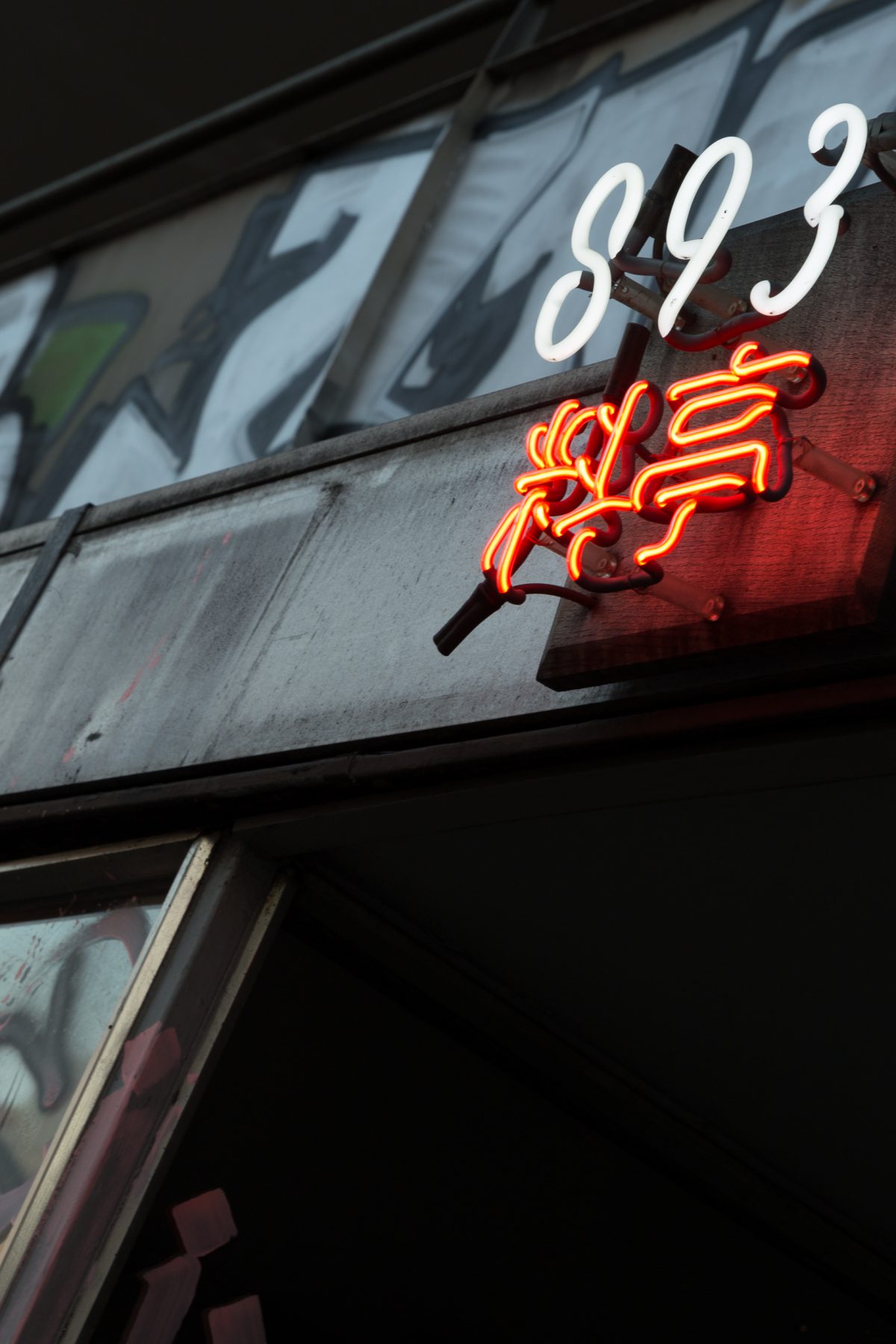